Share All sharing options for: Buffalo Sabres v. Nashville Predators - By the Numbers

This game marked the return of Ryan Miller. It also marked the second time this season that Ryan Miller stole two points for the Sabres. A couple of opportune goals in the first period and a magnificent performance by Miller were the reason the Sabres came away with an important two points.

Miller was good all night but his save on Halischuk in the third period was one of the best saves I have ever seen. I'm sure there have been others but this ranks among the best. Miller didn't do it alone however, the Sabres forwards did a great job of collapsing and making sure the Preds didn't have many second chance opportunities.

Zack Kassian was another Sabres player that stood out in the game. Kassian did not get an assist on the Sabres first goal but his hard work allowed the Sabres an opportunity and Luke Adam buried his chance. The second goal was an unbelievable display of hard work and determination. Kassian was sprung on a breakaway but his ability to settle down a bouncing puck and score the goal was the most impressive part of the goal.

The Sabres get a couple of days off before they play against the Philadelphia Flyers. I'm guessing that Ryan Miller will be excited to redeem himself from his poor performance in the last meeting with the Flyers. 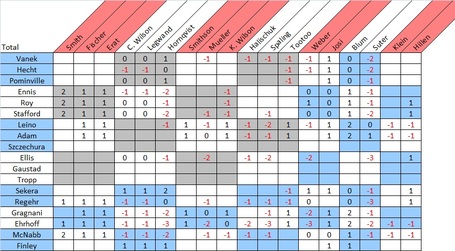