This was one of those games that if it was played 10 times, each team would win five times. Unfortunately for the Sabres, they came out on the short end for the third consecutive game. It is difficult to watch these games because the players on the ice are giving 100 percent they just aren't as good as the other team on most nights. It pains me to say that because most of these young players are very talented and they are going to get better from this experience in the NHL, but why does it have to be now.

The injury bug continues to plague the Sabres as tonight it was Thomas Vanek that left the lineup and did not return. Drew Stafford took his place on the top line and he made a nice play on the Derek Roy goal that tied the score at 2-2, still it is difficult to see the teams best player out of the lineup.

I think we spend Friday talking about the game and analyzing scoring chances, after that we enjoy the holiday. There is another hockey game on Monday for us to watch. 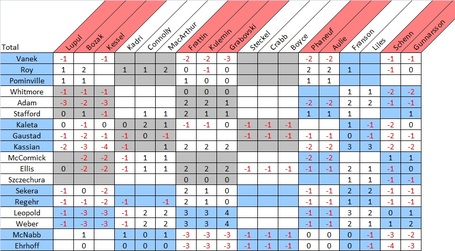