I'm really getting sick of watching this team lose. That is all. The stats will follow.

Shift Charts - This chart makes it easier for you to see who was on the ice at the same time. There is a short tutorial on the top of the chart if you are interested in looking at it.

Corsi/Fenwick Numbers - This is a quick way to determine a teams puck possession. Sabres goalie coach Jim Corsi developed the Corsi Number as a way to judge the players and their puck possession. The theory is that the team that has the most shots taken is probably in possession of the puck more often. There are many ways to look at this stat and maybe I will do a more thorough post at some point, but for each game the numbers show how each player played.

Scoring Chances - After the jump.

There are three charts below that list the scoring chances for the game. The first chart lists each scoring chance individually. The players that were on the ice for both teams are listed to the right.

The second chart is the individual player scoring chance statistics. It tracks the scoring chances for each team while a player is on the ice. The stats are broken up into even strength, power play and shorthanded. Scoring Chances For are listed first and the chances against are listed second. 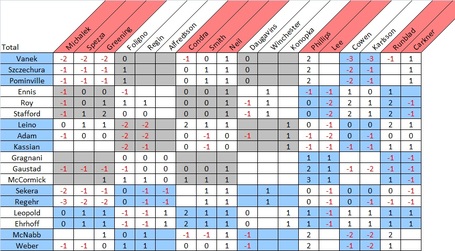