This is the type of game that can be extremely frustrating as a fan. You want to be pissed off at the Sabres for another home loss, but deep down inside you know they played a pretty good game. In fact, they were the better team for most of the contest.

Take away a couple of power play breakdowns, some suspect goalie play for the good guys and another remarkable performance from ex-Sabre Martin Biron and this is an entirely different outcome.

Unfortunately this isn't the first time I am writing this same post. The Sabres have consistently failed to bury their chances and make a couple of mistakes every game that seem to end up in the back of the net. Eventually this becomes a problem instead of just bad luck. I just don't know which it is right now.

If you are wondering just how much better the Sabres were last night, take a look at the stats below. The Corsi numbers are unreal and the scoring chances paint a similar picture. 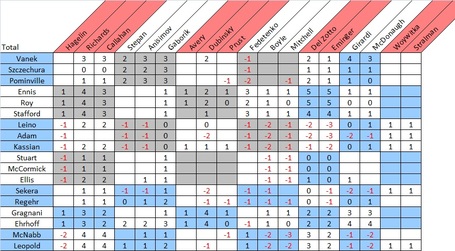