Share All sharing options for: Buffalo Sabres v. Winnipeg Jets - By the Numbers

Wow. What can you say about this hockey game? This game brought me back to my childhood and some of my greatest memories of my younger days. Not only were the Sabres playing against the Winnipeg Jets, but this game was similar to some of those games that were played in the 80's. Some of my childhood memories include a 14-2 Sabres victory (can't remember the opponent for the life of me), a 7-5 victory against the Quebec Nordiques and Gilbert Perreault scoring a hat-trick. This game had that same feel.

It was a great game for fans that like to be entertained but it was a coaches nightmare. Both teams took turns creating chances and scoring goals. The Sabres had 12 power play opportunities, I swear, I'm not lying. In the end the Sabres earned the two points and that looks great in the standings. The coaches will have a field day watching this video. Luckily the team is off until Friday.

I know you are dying to see the stats on this fiasco. 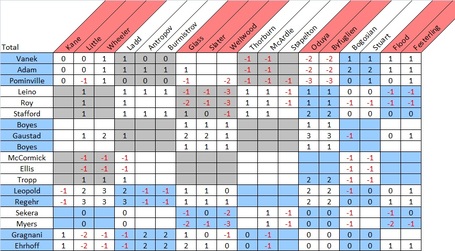