Another solid victory for the Buffalo Sabres. Buffalo did what they needed to do to beat a pretty good Ottawa Senators team on the road on the back half of back-to-back games. It would have been nice to win in regulation, but the extra point could come in handy later in the season. Confidence might be the most important part of the victory.

Who is going to play goalie on Tuesday against Winnipeg? Enroth received the surprise start and he looked good once again. Do the Sabres go back to MIller or do they continue to ride the hot hand?

What happened to the Sabres offense? They started out the season scoring goals at will but that has quickly subsided.

Is Ville Leino turning the corner? He looked better this weekend than he had in any of the previous games.

Those are questions that should be answered in the upcoming games, lets see if the stats from Saturday answer any questions for us. 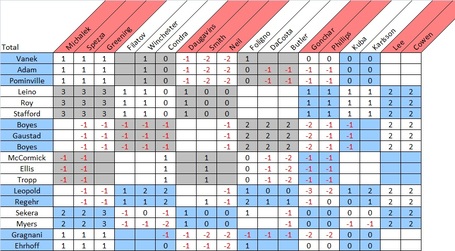