Share All sharing options for: Buffalo Sabres v. Calgary Flames - By the Numbers

An all-around solid effort by the Sabres on Friday night. They faced some tough goaltending from the Flames Henrik Karlsson but they managed to put two by him. The Sabres power play put plenty of pressure on early in the game but they were unable to capitalize keeping the game close.

When the door was shut on the offensive end, the Sabres battled defensively and tightened up to hold on to a 2-1 victory. It was a much needed victory for a team that has been struggling, especially on home ice. 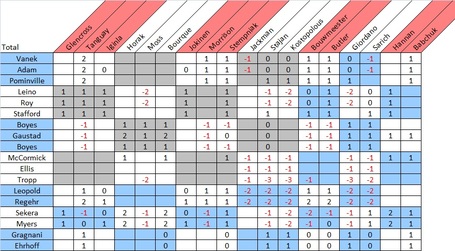