Share All sharing options for: Buffalo Sabres v. NY Islanders - By the Numbers

The scoring chances are back after taking a short vacation for the The Thanksgiving holiday. Unfortunately, I did not pick a good game for the return.

This game had a weird feeling right from the get go. There was this feeling that something was missing from the Sabres game, and it would be the Islanders that would get the bounces. That proved to be mostly true, but lets not sell the Islanders short. They played a very good hockey game and did not look like a last place team.

The injuries have become extremely evident in recent games. I love Zack Kassian but he is showing that he is rookie. He was out-muscled for a couple of pucks along the wall despite his obvious size advantage. I'm sure he will continue to work down in Rochester and will become a more complete player, but for now, he is a rookie.

As much as I like what Brayden McNabb has done, he is obviously a rookie as well. I didn't see him make too many mistakes but Lindy Ruff only put him on the ice for a total of 14:26 in ice time. That number wouldn't be bad for a rookie sixth defenseman but Jordan Leopold was injured in the game and played just over seven minutes. The injury to Leopold and the lack of trust in McNabb forced Christian Ehrhoff to play almost 33 minutes. It is difficult to be effective when you play over half the game.

This was obviously a game the Islanders deserved to win and a late goal by Brian Rolston assured them of their second road victory of the season. The loss was even more disappointing because people were hoping the Sabres had turned the corner and were rid of the demons that haunt them on home ice, after an impressive 5-1 victory over the struggling Washington Capitals. That is obviously not the case. They have a couple of days to try to figure it out before the Detroit Red Wings come to town on Friday night. 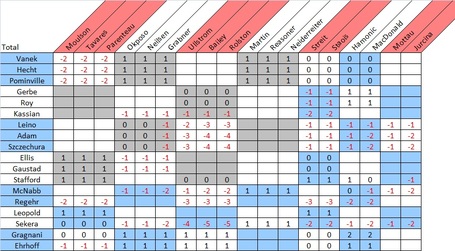