Share All sharing options for: Buffalo Sabres v. Philadelphia Flyers - By the Numbers

Take away the first six plus minutes and the Buffalo Sabres played a decent hockey game. Unfortunately they were already down 3-0 after 6:23.

Ryan Miller was not sharp this evening but he had to withstand constant pressure from the Flyers in the short time he was in the game. Miller was pulled after 6:23 but his team was outscored 3-0 and out chanced 5-0 in that short stretch.

The Sabres did eventually settle down but they had trouble generating chances on the Flyers to allow a comeback. The Flyers were content to sit back and protect their three goal lead in what turned out to be a boring low chance hockey game. 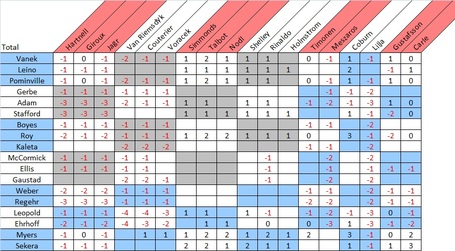