Share All sharing options for: Buffalo Sabres v. Phoenix Coyotes - By the Numbers

Frustration. This game was extremely frustrating to watch. A combination of failed chances and good goaltending by Mike Smith led to the Sabres loss.

Lindy Ruff publicly scolded Thomas Vanek, Derek Roy and others for missing their chances. He made a strong point that they were responsible for the loss. Completely absolving Jhonas Enroth for a couple of bad goals, Christian Ehrhoff for a couple of blown assignments and the rest of the players that made mistakes.

I don't completely agree with Ruff on his assessment of blame but there was no question they missed their chances. The Sabres were the better team most of the way but Mike Smith was better than Jhonas Enroth and the Coyotes did a better job of capitalizing on their chances. 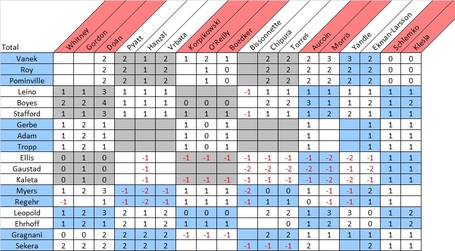