Share All sharing options for: Buffalo Sabres v. Carolina Hurricanes - By the Numbers

The Sabres continue to earn points on the road. This time it was Jhonas Enroth leading the way as he stopped all 34 Hurricanes shots. Jason Pominville turned out to be the offensive hero, with a power play goal in the first period.

The Sabres did not generate much in the way of offense all night but they kept most of the Carolina shots to outside allowing Enroth an opportunity to make the save. I'm not sure if the numbers will show it but I thought the line of Boyes-Leino-Stafford was the best offensive line for the Sabres.

Not much time to rest as the Sabres host the Coyotes on Saturday night at The First Niagara Center. 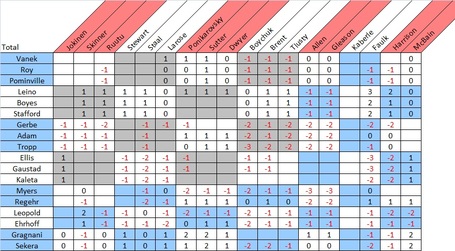