Sab(re)metrics: How Good is Thomas Vanek?

Share All sharing options for: Sab(re)metrics: How Good is Thomas Vanek?

Looking at Thomas Vanek's statistics from this season and last season, we know that he has become one of the best, if not the best player on the Buffalo Sabres. Looking over his career, we can also conclude that Thomas Vanek's best offensive season was his 43 goal and 84 point campaign during our President Trophy winning season of 2006-07. While these are all good seasons, I still need to ask myself:

"How good is Thomas Vanek?"

To find out these answers and more, you should take the jump.

To answer these questions, I will do three different examinations: 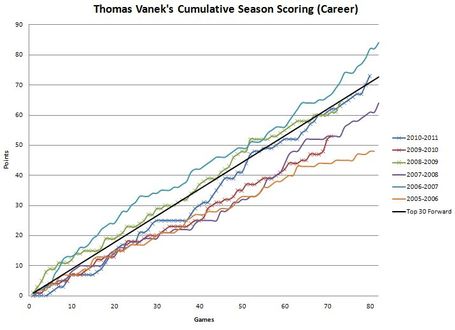 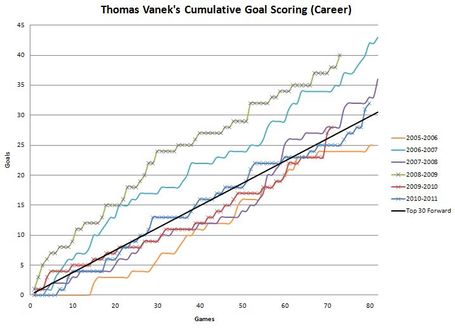 Initially, these plots were completed to analyze how "streaky" or "hot" Thomas Vanek can be over a season. While at times Vanek would not score for a few games (such as his 8 game scoreless streak last season), I found that these plots were not particularly good at showing how hot or cold Vanek plays over a season. Instead I plotted the scoring and goal rate of the average 30th best forward in the NHL since the Lockout, and compared this total with each of Vanek's scoring and seasonal totals.

When comparing these totals, it is shown that Thomas Vanek is always a top 30 goal scoring forward in the games he plays (minus his rookie campaign), but he is not always a top 30 point scorer. This could be attributed due to him being more of a goal-scorer so far in his career than a playmaker since he always had a higher goal total than an assist total in every season except last season. Could this change have occurred due to his separation from Derek Roy during even-strength play? We only have one season of data to analyze this, but it would be interesting to see if his stats reflect that this season if Ruff keeps the VAP line together.

The second analysis is completed using the Rob Vollman article How to Identify Top Six Forwards. In this piece, Vollman develops a metric to analyze what makes a top six forward using their points per 60 minutes of even strength play. His metric is below:

Using Vollman's metrics, Thomas Vanek has always been a standard top 6 player in the NHL, with the exception being 2006-2007 and his current season where he is on pace to put up better than elite (or rare) EV/60 numbers. To establish a comparison across the NHL, the classification of some other NHL players since 2007-2008 using Vollman's metrics is below with the amount of supporting cast, standard or elite seasons they have had in parenthesis.

While Vanek only has one season where he can be considered elite (actually better than elite), he is a more consistent player than half the players on the list who have had a season where they were considered a supporting cast player through their EV/60 statistic. If Vanek could continue on his elite pace this season, he would have similar EV/60 numbers that are similar to Malkin's, St. Louis', and Zetterberg's career totals. Overall, this metric should show that Vanek is quite a consistent player and that he could be a top 6 forward on any team in the NHL since 2006-2007.

The third analysis is to examine Thomas Vanek's GVT since the Lockout. To refresh your memory, the GVT (Goals Versus Threshold) stat represents how much better a certain player is over a replacement-level NHL player. Therefore, the player with the highest aggregate GVT since the lockout should be the best player since the lockout, and so forth. The list below was taken from the list 50 forwards (post-lockout, regular season) found in this year's copy of Hockey Prospectus. All Sabres players in the list have been bolded.

From the above table, Thomas Vanek is ranked 20th in overall GVT and19th in OGVT (offensive GVT) for all forwards since the Lockout. Some other notable Sabres found in this list are Derek Roy (34th), Jason Pominville (36th), and Brad Boyes (46th). Since GVT is a metric to analyze the effectiveness of all NHL player's versus a replacement-level player, I personally think it is the best way to analyze how good or bad a player is over a give period of time. It should also be noted that GVT is a statistic that relies heavily on games played, so player's like Kopitar, Malkin, and Semin could be ahead of Vanek if they had played an additional season that Vanek has got to play.

Statistically, it is safe to consider Thomas Vanek as one of the top 30 forwards in the NHL. While he is not always a top 30 point scorer, he has been a consistent top 30 goal scorer, top six standard forward, and a top 20 forward in GVT since the Lockout. Entering his 7th NHL season, it will be interesting to see how Vanek's career will progress in the coming years. For example, will TV become an elite (top 10) NHL forward? Or will he continue to be a standard top 30 forward in the NHL?

To be fair, one question that was not answered in this article was the common complaint of Thomas Vanek being "overpaid." Many will say, "Yes, Thomas Vanek is a good forward, but he is not worth his $7.14 million cap hit!" Therefore, I will examine Thomas Vanek's actual worth in my next article: Sab(re)metrics: Thomas Vanek is good, but is he overpaid?