Share All sharing options for: Buffalo Sabres v. Florida Panthers - By the Numbers

The Buffalo Sabres continue to struggle on home ice. They struggled to generate chances against a Panthers team they dominated last week in Florida. The Sabres probably didn't deserve to win the hockey game, still this is a bitter loss to swallow.

The Sabres had a 2-1 lead late in the game and figured to have a long power play after Marco Sturm was given a five minute major for boarding Jordan Leopold. Instead the power play was negated by a controversial call on Nathan Gerbe and the Panthers scored two late goals to win 3-2. 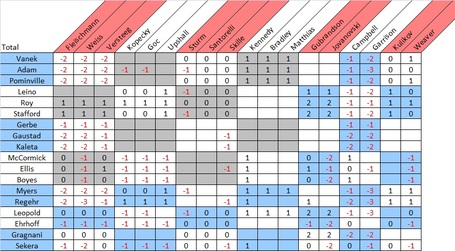