The Tampa Bay Lightning played their defensive style to perfection as they held the Sabres in check all night. The scoring chances were few and far between for both teams but eventually Pavel Kubina beat Miller on a shot from the point. That goal allowed Tampa Bay to sit back and stifle the Sabres offense.

The Lightning eventually added to their lead as turnover at the blue line allowed Martin St. Louis to be left all alone in front of the Sabres net and he doesn't miss from there.

All the stats are below.

Scoring Chances after the jump 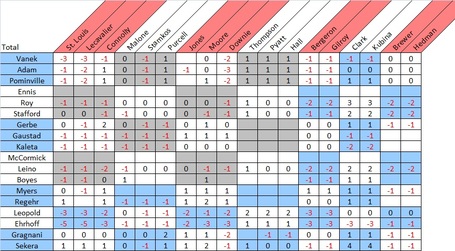