Share All sharing options for: Buffalo Sabres v. Florida Panthers - By the Numbers

The Sabres were a little bit lucky in their victory against the Canadiens on Tuesday night. They did not need luck on Thursday night as they dominated the Florida Panthers in a 3-0 victory. This was as close as you can get to the perfect performance.

I was skeptical of the line changes that Lindy Ruff made before the game. He proved why he is one of the longest tenured coaches in professional sports and I am writing this post. The line combinations seemed to click and it might have woke up Ville Leino and Brad Boyes.

Below we will take a look at some of the stats from this contest. 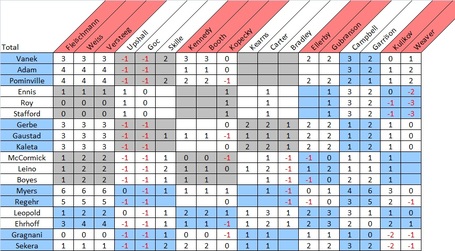