Buffalo Sabres Are Set To Debut New Concessions This Season

Share All sharing options for: Buffalo Sabres Are Set To Debut New Concessions This Season

The First Niagara Center has gone through a complete transformation this season with changes in the name and modifications done around the arena. The concession stands are getting the same type of face lift with new signs and new items on the menu.

The Sabres and Delaware North hosted a media tasting event where all of the new concession items were available to try. All the areas of the concessions are getting new items including new items on the Harbor Club menus. 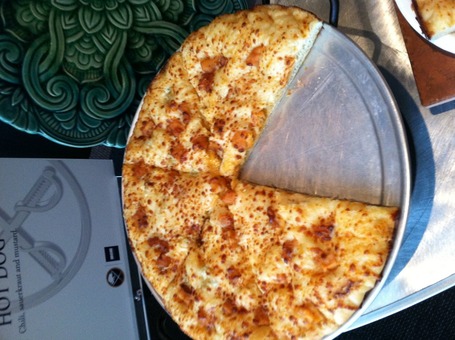 To start though, the new concessions that will be featured around the arena include a steak sandwich, a chicken parmigiana sandwich, new specialty pizzas, and a Buffalo style chicken finger sandwich. The pizza pictured above is a Buffalo chicken which will be one five specialty pizzas that will be rotated throughout the season. One of the major changes to the pizza served this year is the the size of the slices. Pizzas this year will apparently be cut into six slices instead of eight which gives the fans more for their money. 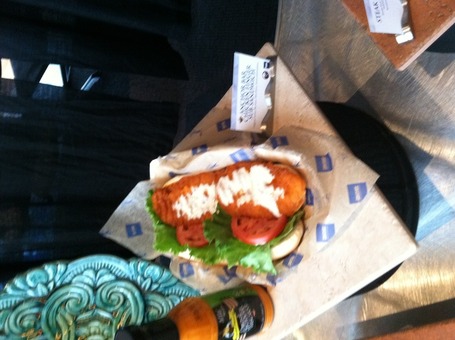 The new Chicken Finger sandwich was one of the creations that came from fan suggestions. Fans were asking for more local items on the menu and this was one of the things that came out of it. The chicken fingers are covered in Anchor Bar wing sauce and will have blue cheese dressing, lettuce, and tomato on it. The sandwich is what it is, a chicken finger sandwich which is a solid item to have on the menu.

Following the jump, the new items in the 300 level and in the Harbor clubs.

The 300 level will have two new exclusive items, the Main and Fillmore hot dog and the Downtown hot dog 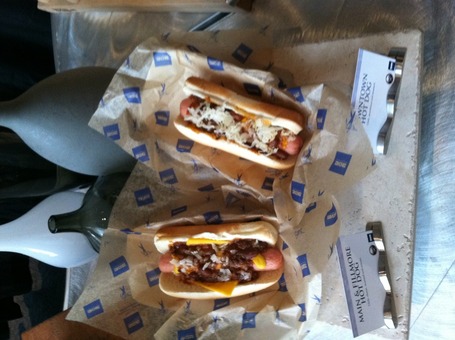 Along with the new items in the concession stands, there are some new items to the 100 and 200 level Harbor Club menus. New to the 100 level Harbor Club menu is Tapas, a Beef on Weck sushi roll, Lobster Macaroni and Cheese, and Jumbo Ravioli. The lobster macaroni and cheese was probably the hit among all of the tasters. It was fairly creamy with a good amount of lobster in it.

The Beef on Weck sushi roll may have been the one thing that failed for me when I tried it. The roll is sesame beef and cucumber wrapped in tempura-fried sushi roll with caraway rice and horseradish fish roe. One of the faults I had with the roll was that when it was called a Beef on Weck roll, I somewhat expected more salt and some actual kimmelweck flavor. Neither of those things came through on the roll. The beef was good, but it seemed to just overpower the roll and take over the flavor of everything.

All in all, the new menu items that Sportservice has come out with should be hits with the fans. The one question that wasn't answered was how much all of these new items are going to be because we weren't supplied with prices.