Share All sharing options for: All Time Number Debate - Number 1

For the next few months, we here at Die By The Blade will be celebrating the Sabres' 40th anniversary with a look at the best players wearing a specific number in what we are calling the All Time Number Debate. A total of 364 players have played for the Sabres during their 40 year history and they have worn a total of 68 numbers and you have the power to pick the best.

Five players wore the number 1 for the Buffalo Sabres, all of them goaltenders. 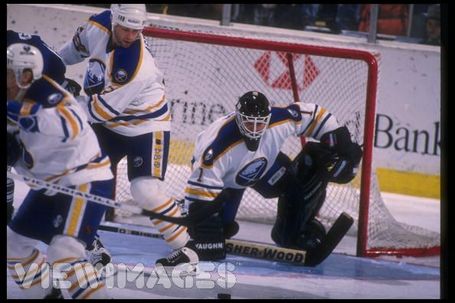 When we mentioned Martin Biron in the last number debate post, we mentioned that there were five goaltenders that suited up for the Buffalo Sabres during the 1995-96 season. The '95 season was a struggle for the Sabres in their final season in the Memorial Auditorium. The team finished fifth in the Northeast Division with a 33-42-7 record and it was the first season behind the bench for a new coach, Ted Nolan.

John Blue signed as a free agent in the 1995 season after the team had major issues with their goaltending. At the time, Blue was playing with the Phoenix Roadrunners of the International Hockey League when he was released by the team in November. Blue was picked up by the Sabres at the end of December of 1995 after backup Andrei Trefilov went down with a knee injury. Blue's first game with the Sabres came on December 29, 1995 against the Chicago Blackhawks, a 5-2 loss. He made two more starts, going 1-2 as a starter and 2-2 overall with the team. Blue wasn't particularly inspiring with a 3.53 goals against average and .891 save percentage in his five games with the Sabres.

After his time with the Sabres was over, Blue spent a year with the Austin Ice Bats before finally retiring after the 1996-97 season.

Following the jump, the rest of the Sabres goaltenders who wore number 1. 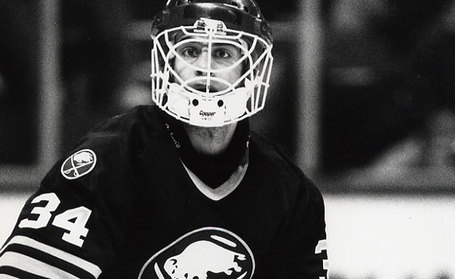 Littman wore two numbers during his brief career with the Buffalo Sabres, numbers 1 and 34. Number 1 was worn during the 1991-92 season in which he played in one game, allowing three goals in a 8-3 defeat to the St. Louis Blues on January 29, 1991. Littman played a total of two games with the Sabres after being drafted in the 11th round of the 1987 Entry Draft by the Sabres.

Littman had a very short NHL career. He played a total of three NHL games, the other game coming in the 1992-93 season with the Tampa Bay Lightning. His career NHL stats included a 5.96 goals against average and .794 save percentage. He allowed a total of 14 goals on 68 shots. 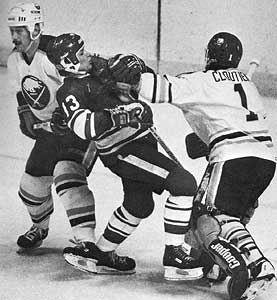 Jacques Cloutier had a very tenuous time as a Buffalo Sabre during his seven year career. Cloutier wore two numbers in Buffalo, 1 and 29. He wore 1 for most of his time here starting in the 1983-84 season and ended in the 1988-89 season. During that time, Cloutier was shuttled back and forth between Buffalo and Rochester and never seemed to grab a hold of the starting spot.

Cloutier never seemed to have much success in net during that time frame, only posting one winning record in the 1988-89 season. Cloutier spent as much time playing in Rochester as he did in Buffalo, being bumped out of the starting goaltender spot by goaltenders such as Tom Barrasso and Daren Puppa.

During his time in the number 1 jersey, Cloutier posted a 35-50-8 record with a .870 SV%. He did play in one playoff series in 1989 against the Boston Bruins. Cloutier played in Game 1 which the Sabres won and then was replaced by Clint Malarchuk who had recovered from his life-threatening injury. Malarchuk lost Game 2, and Cloutier was back in net for Games 3-5, all Bruins wins.

Cloutier was traded to the Chicago Blackhawks in the 1989-90 season. He played in Chicago for a season and a half before being traded again to the Quebec Nordiques where he played for four seasons. 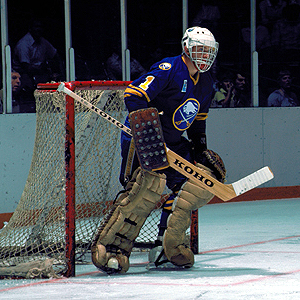 Don Edwards was apart of some great Sabres teams in the late 1970's and early 1980's, including winning the Vezina trophy in 1980 with Bob Sauve. At the time, the Vezina was awarded to the team with the lowest goals against average.

Don Edwards was tested by the Sabres from the very start of his career as a Sabre. On the day that Edwards was called up from AHL Hershey, the team made the decision to start Edwards over then starting goaltender Al Smith. Except, Smith was the one who told Edwards he was starting after warmups completed:

"I got to the locker room at about 5 p.m. for the game. We all went out on the ice and Al Smith took all of the warm-ups. Then I was sitting next to him in the locker room right before game time and said 'Good luck tonight.' He looked at me and said 'You don't know you're playing?'" "That sort of ended the conversation right there. I was dumbfounded. So they play the anthem and when it ends Al hops off the bench, skates about five strides and says 'See you, Seymour' to [Sabres owner] Seymour Knox in the crowd. Then he skates off the ice. So it's my first game in the NHL and I was the only goalie in uniform."

Smith quit the team that night and the Sabres were dependent on Edwards the rest of the season.

Edwards was known as a workhorse, evident by the fact that he had one season where he played in less than 30 games, his rookie season in 1976. During the 1977-78 season, Edwards played in a league leading 72 games and also led the league in wins that season with 38. Edwards will also be known as the goaltender that allowed Gretzky's 77th goal in a season at Memorial Auditorium

While Edwards had impressive regular season stats, the Sabres never seemed to advance far into the postseason during the late 70's and early 80's, only making it out of the first round . The Sabres decided that they needed to move forward and they traded Edwards and Richie Dunn to the Calgary Flames in 1982. 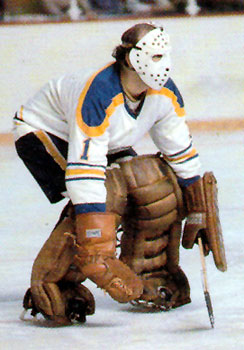 Roger Crozier has the distinction of being the first goaltender for the Buffalo Sabres. He was acquired from the Detroit Red Wings shortly after the expansion draft for Tom Webster. Crozier played in the first game for the Sabres on October 13, 1970, a 2-1 victory over the Pittsburgh Penguins.

Crozier played a total of six seasons with the Sabres, his best coming in 1974-75. Crozier went 17-2-1 with a 2.62 GAA while he shared the net with Gerry Desjardins as the Sabres made their first ever appearance in the Stanley Cup Finals. Crozier went 5-3-2 in the playoffs that season. He also still holds the Sabres record for most shots faced in a season with 2,190 during the 1971-72 season.

Crozier was traded to the Washington Capitals during the 1976-77 season. He hadn't played any games up to that point of the season, played three games for the Capitals and subsequently retired and joined the Capitals front office.

Crozier was the first member of the Sabres Hall of Fame, elected in 1980 and the NHL created the Roger Crozier Saving Grace Award in 2000, given to the goaltender who posts the best save percentage that year. The winner of the Crozier award for the 2009-10 season was Tuukka Rask of the Boston Bruins.

Now its time for you to pick your choice for the best Sabre to wear Number 1 and defend your choice in the comments.