Starting today for the next few months, we here at Die By The Blade will be celebrating the Sabres' 40th anniversary with a look at the best players wearing a specific number in what we are calling the All Time Number Debate. A total of 364 players have played for the Sabres during their 40 year history and they have wore a total of 68 numbers and you have the power to pick the best.

Before we start the process, here are the criteria for evaluating players.

1.) Please only take into account the time frame that the player wore the number. Many players during their career wore more than one number and some players wore four different numbers during their time as a Sabre. It is only fair to take into consideration the time they played in that number rather than their entire career. A player can be declared the best player in more than one number though.

2.) Retired numbers are not up for debate, but will still be presented. The organization has already effectively taken that debate for us.

After each presented number, we will throw up a poll where you guys will decide who was the best player. Please state your case in the comments too.

Following the jump, we start the first debate with number 00. 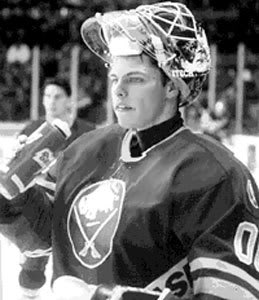 The 1995-95 season saw the Buffalo Sabres go through five different goaltenders including calling up a player they drafted in the first round of that season, Martin Biron. Biron was playing with the Beauport Harfangs of the Quebec Major Junior League when he was called up by the Sabres to play in his first NHL game on Boxing Day in 1995 against the Pittsburgh Penguins. Biron didn't fare well in that game nor the other two games that he played in during that season. In the three games that Biron appeared in, his stat line was 0-2-0 with a 5.04 GAA and .844 SV%. Thankfully for the Sabres, Biron's second appearance in the NHL fared much better.

The only other player to wear the number 00 is John Davidson with the New York Rangers during the 1978-79 season. Davidson is currently known for being the president of hockey operations for the St. Louis Blues. Fun little fact, J.D was the inspiration for the Foreigner song Double Vision after the band members were attending a Rangers/Sabres game.

No other player in the NHL can currently wear 00 due to the fact that the official NHL database just can't handle that number being entered in the system.