In the spirit of the 2010 Winter Olympics I decided to break down the Sabres roster by Country. The Sabres roster is heavily influenced by North American talent and Americans in particular. Of the 13 forwards on the Sabres roster, seven of them are Americans. When breaking down the top six there are three Americans and one Canadian. Of course Thomas Vanek is Austrian and Jochen Hecht is German and both are currently top six forwards.

Follow the jump for a breakdown of the Sabres by Country. 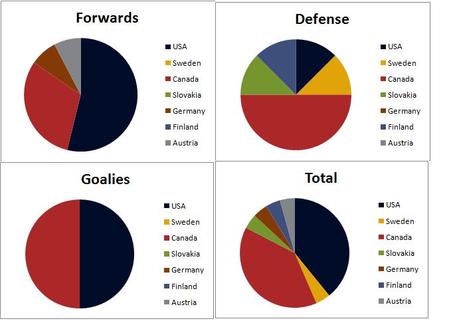 The pie charts are difficult to read but they give you a better idea of the Sabres roster breakdown. I find it interesting that only four countries are represented on the front line for the Sabres and over half the forwards are American.

The Charts above serve very little purpose but it does make us aware of the makeup of the team. For argument sake I went through the rosters of the division leaders to look at country of origin and I was surprised at the number of Canadians on the rosters, especially the Capitals and Sharks. San Jose has 14 Canadians on the roster and only four Americans.

If you want to use that as an excuse for the Sabres recent decent in the standings, I will remind you that the New Jersey Devils are constructed much like the Buffalo Sabres. The Devils have a total of eight Americans on their roster and they are currently second place in the Eastern Conference.