Over the next few weeks we will take a look at the 2009-10 Buffalo Sabres and examine what lies ahead for each player during training camp and preseason.  Today's look will be part one of a three part series based on the prospects and tryouts that will be attending camp. 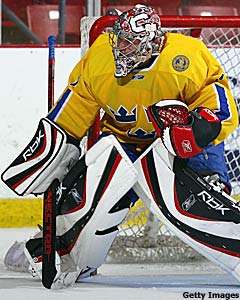 Enroth has been apart of the Sabres organization since 2006 when he was drafted 46th in the draft that year.  He has played professional hockey for five years, four in Sweden and is currently playing for the Portland Pirates.  In his only season with the Pirates last season, Enroth had a solid season going 26-20-6 with a 2.75 GAA and a .914 SV% which put him sixth among rookie goaltenders in the AHL.

He has always impressed people with his skill.  He first was noticed in the 2008 WJC where he posted a .905 SV% and 2.33 GAA on the way to getting a silver medal.  He was a runner up as Elitserian rookie of the year that year and then proceeded to come to the United States to play with the Pirates.  Enroth is also primed to become the backup goaltender when Patrick Lalime's contract ends at the end of the season.  He was called up as a backup during the time when Lalime went down with a hip injury last season but never made it into a game.   With the status of Lalime's hip injury not really known, Enroth may see some playing time this season.  If that is the case, he should impress and be seriously considered as the full time backup of this team. 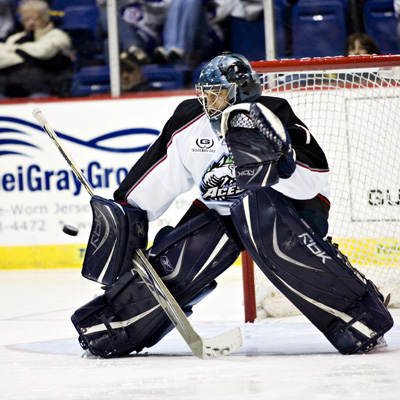 Lamoureux was signed by the Sabres this past offseason to back up Jhonas Enroth in Portland.  Last year, Lamoureux was the ECHL goaltender of the year last year with a 2.29 GAA and .923 SV% in 51 games while leading the Alaska Aces to the ECHL championship round before losing in seven games to the South Carolina Stingrays.  In the playoffs, Lamoureux had an amazing 1.95 GAA and 4 shutouts in 21 playoff games.

On top of being a really good ECHL player, Lamoureux played well during his four years at North Dakota.  He was a Hobey Baker finalist and led the Sioux to the Frozen Four in his senior season.  During his career at North Dakota, he was 60-38-10 with a 2.14 GAA and a .920 SV%.

Lamoureux helps the Sabres in two ways.  First, being signed as a backup in Portland will only help Jhonas Enroth who started to wear out due to playing 56 games last season.  Second, it only strengthens the goaltending prospects of this team.  While Lamoureux may never make it as a goalie here in Buffalo, if he impresses in Portland he could be serious trade bait down the road.  A concern with Lamoureux is his small size, 5' 9" and 190 pounds although size doesn't matter though when you make plays like these.