From now until the season starts on October 3rd, we will take a look at the players making the squad and try to answer the main question that is going to be asked about them this season.  For now, we look at backup goaltender Patrick Lalime. 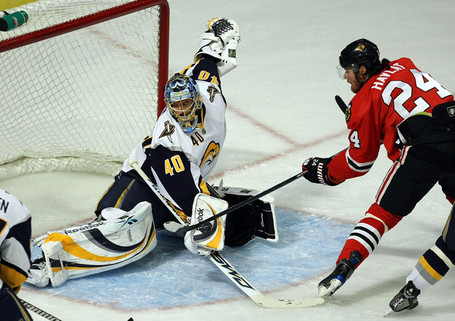 Patrick Lalime was an adequate backup goaltender when the Sabres signed him last season to a two-year contract.  They knew they needed a backup that was better than the Jocelyn Thibault expiriment that saw Ryan Miller playing the final 34 games of the season as the Sabres tried to make the playoffs that season.  This past season, Lalime had to step into the fire when Miller went down with an ankle injury and ultimately did not play very well behind a team that played rather uninspired in front of him.  The main question for Lalime this season is whether he can play better with the extra time that he is going to see this season and will the Sabres benefit from that play?

Lalime's stats from last season suggests that while he did not play a terrible game, it was not enough for the Sabres to overcome the loss of Miller.  Lalime went 5-13-3 over the season, but went 3-6-2 after Miller went down with the injury.  During that time, he allowed three goals or more six times in those twelve games including the last three games he saw action in.  Lalime finally ended the season with a hip injury which most likely affected his play in those final games.

Lalime needs to play better this coming season because he will see more action with Ryan Miller most likely playing in the Olympics this season.  That extra playing time for Miller will only add to the fatigue that he seems to encounter as the season drags on into March and April.  Being able to keep him fresh during the season will be crucial.  Lalime will likely play in the games that will be considered the "gimme games", games against lesser opponents in the standings, which the Sabres had a hard time with and was a main reason that they did not make the playoffs last season.

The other factor in Lalime's play last season was that the team looked as if they did not have any confidence in his ability in keeping them in any sort of game.  The overall Sabres team looked sloppy and uninspired during most of  the twelve game reign of Patrick Lalime as starting goaltender.  They scored two goals or less in five of those twelve games which will submarine a team's chances of winning any game.  On the flip side though, this also means in seven of those games, they scored three or more which should give them a much better chance at winning.

Patrick has been an NHL goaltender for nine seasons and at 35 years old is well over the peak of the talent curve.  His game is not going to get exponentially better and very well may suffer a decline heading into this season.  For the Sabres, all they can hope for is that he is good enough to keep them in every game that he plays in and steals the game or two that they cannot keep themselves in.