1999 Stanley Cup Finals Remix: The State of the Stars

Share All sharing options for: 1999 Stanley Cup Finals Remix: The State of the Stars 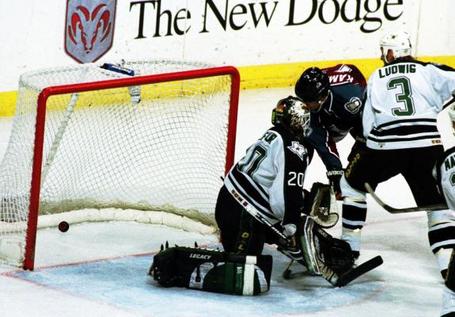 The Dallas Stars were once the Minnesota North Stars.  They moved to Dallas in 1993 and had really good on-ice success from 1993 to 1998.  They only missed the playoffs once and won their division twice.  Led by superstar Mike Modano, the Dallas Stars were looking to become the fifth straight Western Conference team to win the Stanley Cup.

After winning the President's trophy in 1998, the Stars road to the Stanley Cup Finals started with the Edmonton Oilers.  The Oilers squeaked into the eighth seed with 78 points.  They consequently were swept by the Stars not for a lack of effort though.  Each game during that series was won by one goal.  The Stars then moved on from the Oilers to the Blues who took them to six games, four of them going to overtime.  The Stars were fortunate though in the conference semifinals due to the fact that the defending champion Red Wings were bounced out of the playoff by the Avalanche in seven games.  The Red Wings defeated the Stars in the Conference finals on their way to the second straight Stanley Cup in 1998.

The Avalanche were no pushover team though for the Stars.  They were led by elite goaltender Patrick Roy and had some major names on their roster with Peter Forsberg, rookie of the year Chris Drury, and Joe Sakic.   The Avalanche proved to be a tough foe for the Stars, leading the series 3-2 before the Stars had back to back 4-1 wins in games six and seven to head to the Finals.