1999 Cup Finals Remix: The State of the Sabres

Share All sharing options for: 1999 Cup Finals Remix: The State of the Sabres 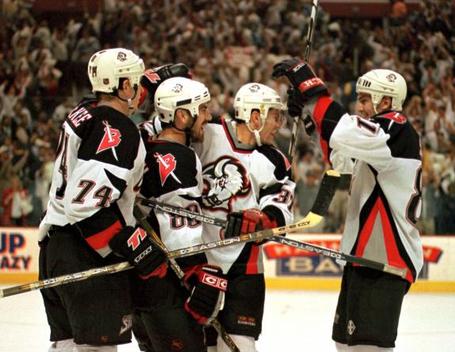 The Buffalo Sabres were heading into the 1999 Stanley Cup Finals riding with a lot of confidence.  That can be easy when you have one of the world's best goaltenders in net.  Dominik Hasek was probably the best goaltender in the NHL during the 1998-99 season.  In fact he won his third straight Vezina trophy that season.  He also had his career best season that year, having a 1.87 GAA and .905 SV%.  Hasek led a team that was full of non-household players, players that are good but are not well known around the league.  Michael Peca, Miroslav Satan, and Alexei Zhitnik were the stallworts to this team that just kept winning.

This team was coming off a fairly controversial season that saw them lose their award winning coach and GM due to tension between the two.  During the 1997 season, that tension spilled over to elite goaltender Dominik Hasek and Jim Kelley which led to a lockeroom altercation between the two.  The 1998 season saw a new GM, Darcy Regier, and new coach, Lindy Ruff take the Sabres to the Conference Finals only to lose in six games to the Washington Capitals.

New GM Regier made some moves at the trade deadline to shore up some holes in the lineup.  He sent superpest Matthew Barnaby to the Pittsburgh Penguins for Stu Barnes and picked up Joe Juneau from the Washington Capitals.  Both Juneau and Barnes were key to the Sabres as they made the run to the playoffs.  Barnes had 7 goals in 21 playoff games that season and Juneau had three goals and 11 points in 20 playoff games.

The Sabres went 38-27-17 which was good for 91 points.  This put them fourth in the Northeastern Conference and seventh in the Eastern Conference heading into the playoffs.  From there the Sabres made quick work of the second seed Ottawa Senators, sweeping them in four games, and the Boston Bruins, beating them in five.  This setup a conference final matchup between two bitter rivals, the Sabres and the Toronto Maple Leafs.  Pat Quinn was behind the bench for the Sabres and the Leafs were led by captain Mats Sundin. The Sabres took care of the Leafs as well in five games heading to their first Stanley Cup Final in twenty-four years.