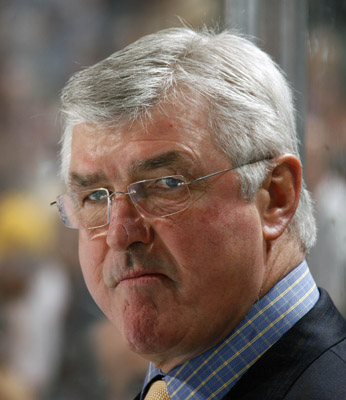 Pat Quinn has done some entrance interviews with the Edmonton media since being hired as head coach this past week.  mc79hockey grabbed this nugget during an interview with Edmonton Sun's Terry Jones.

"When I lost my job in Toronto, it was my seventh year. In the time I was there, we’d played the second-most playoff games of any team in the league. Then we miss the playoffs by one point and I lose my job. I had one job offer three weeks after I was fired. Then nothing. I look around and it’s funny. Some places you get some extra time. Some guys miss playoffs five of seven years and are still working."

"Some guys miss playoffs five of seven years and are still working."  As the guys at mc79hockey pointed out, the only coach that fits is Lindy.  Now, Quinn is a very good coach.  In his 19 years behind the bench, Quinn has accumulated 1,494 points in 1,318 games which is good for fourth overall.  His 1,318 games is the 5th most ever in the NHL.  He has earned a point in 56.7% of the games he has coached.  He has .514 winning percentage in the playoffs.  Quinn's track record is impressive and will probably earn him a spot in the Hockey Hall of Fame at some point.

Lindy Ruff doesn't have the years that Quinn has had but in terms of the overall winning, they are comparable.  In Ruff's 902 games, he has earned 1,002 points and earned a point in 55.8% of those games.  Ruff's playoff winning percentage is .591 in about half as many games as Quinn.  With a few more years behind the bench, Ruff might have the pedigree that Quinn has accumulated.

In this case though, it seems that Quinn is just bitter. Quinn has been without a job since the 2005-06 season, his last with the Maple Leafs.  In that time, Ruff and the Sabres have plodded along and not made as much headway in terms of playoff apperances but Ruff is still revered by most in the organization and the community.