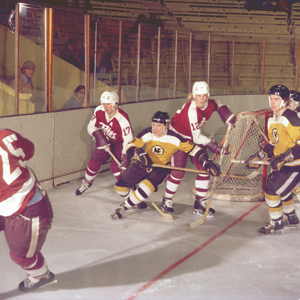 Mark Renaud played a total of 10 games with the Buffalo Sabres during the 1983-84 season.  During that time, he scored one goal and three assists.  These were the final 10 games of Renaud's short NHL career.  He spent the rest of the 1983 season and the 1984 season with Rochester.

Renaud spent the rest of his career with the Hartford Whalers.  He played a total of four seasons with the Whalers for a total of 142 games.

Mark Renaud's son, Mickey Renaud played for the Memorial Cup winning Windsor Spitfires until he passed away at the age of 19.  He was the captain for the Spitfires at the time of his death.  The OHL has dedicated a captain's award in his honor and the Spitfires has retired his number 19.