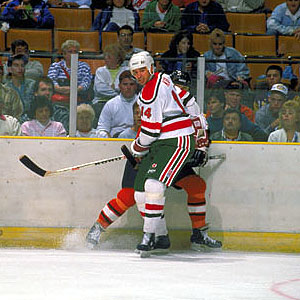 Korn played for the Buffalo Sabres during the 1986-87 season.  He wore three different jersey numbers during that time. Korn's trip to Buffalo was a fairly tumultous one.  On October 3, 1986, Korn was traded from Toronto to Calgary for Terry Johnson.  He was then flipped by the Flames to the Sabres for Brian Engblom.