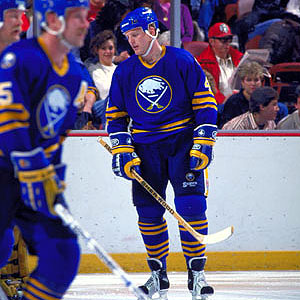 Dykstra played for the Sabres from 1985-88.  He signed a minor-league contract with the Buffalo Sabres in 1982 and broke through with the Sabres in 1985.  During his career with the Sabres, he played a total of 128 games scoring 5 goals and 27 points.  He was traded to Edmonton in 1988 with a seventh round pick for Scott Metcalfe and a 9th round choice that ended up being Donald Audette.