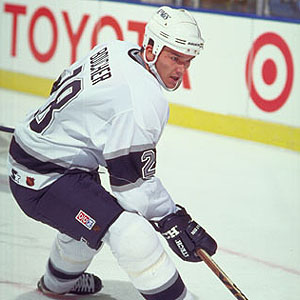 Boucher played for the Buffalo Sabres from 1992-94.  During that time, he played a total of 71 games where he scored 6 goals and 23 points.  He was drafted by the Sabres in the first round of the 1991 Draft, 13th overall.  He was part of a trade with the Los Angeles Kings that sent Alexei Zhitnik, Robb Stauber, and Charlie Huddy to the Sabres.