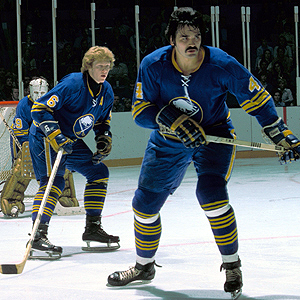 Jerry Korab played for the Buffalo Sabres from 1973-1980 and then again in 1983-1984.  Korab was known for his physical style of play and his good defensive abilities.  Korab was brought in by Sabres GM Punch Imlach in 1973 from Vancouver for John Gould and Tracy Pratt and was part of the solid defensive core in 1975.

Korab played a total of 537 games during his two terms in Buffalo.  Korab wore the number four for most of his career here but also wore the number 44 for a brief period.  During Korab's 537 games, he scored 67 goals and 283 points.

Besides having somewhat of a scoring touch, Korab also took a lot of penalties.  He is 93rd all time on the penalty minute list with 1629.  Korab's nickname was King Kong primarily for his 6'3", 220 lb frame.