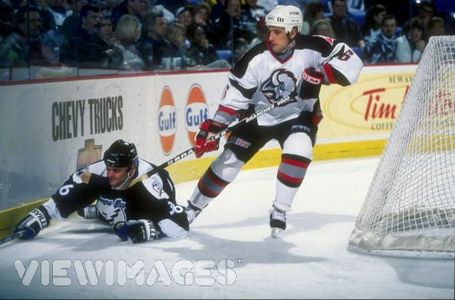 Bob Boughner, or the Boogieman, played for the Sabres from 1995-98.  He played a total of 177 games scoring 2 goals and 13 points.  Scoring wasn't the Boogieman's best attribute though.  Boughner was best known for being a physical player and would drop the gloves with the best of them.  Boughner had a total of 494 penalty minutes in his three seasons here.

Boughner was claimed by the Nashville Predators in the 1998 expansion draft.  He proceeded to play a season and a half with the Predators and then was dealt to the Penguins.  Overall, Boughner played for 10 NHL seasons for six different teams.  In his 630 career games, Boughner racked up 1382 penalty minutes.

Boughner now coaches the Windsor Spitfires in the OHL and has been named the OHL coach of the year for the past two seasons.