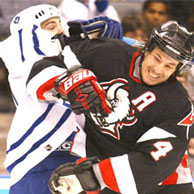 Warrener's career started with the Florida Panthers in the 1995-96 season, the year of the Rat.  He left the Sabres and joined the Flames during the 2003-04 season, the year that they faced the Lightning in the Stanley Cup Finals, noticing a pattern yet.  In his NHL career, Warrener has played 714 games, scoring 24 goals and 106 points.  Warrener still plays in the NHL for the Flames.