No Habs No and the Sabres

Share All sharing options for: No Habs No and the Sabres 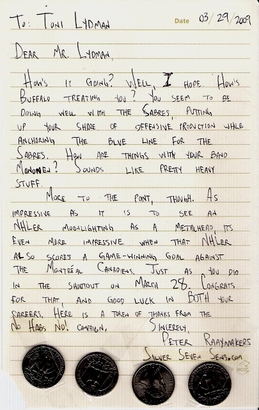 No Habs No is a campaign co-run by Peter Raaymakers of Silver Seven Sens and Ben Myers of Sens Army Blog that rewards players that score game-winning goals against the Montreal Canadiens.

Not usually do we support anything that Senators fans do but the Sabres need the Canadiens to lose basically every game they play.  So we here at Die By The Blade are throwing our support behind the cause for the final six games of the Canadiens season to try and drive enough negative energy their way.  In doing so, I asked a few questions of Peter which he kindly answered for us about the campaign.

1.)  How did you ever get the idea to start the campaign?

Actually, it was my girlfriend's idea. We were watching a Habs/Bruins game (Nov. 22), and sick to death of the "olé" chants that Montréal fans--always annoyingly, often prematurely--have in their building, so she said she'd give Milan Lucic a dollar if he scored the winner. And I said I'd do it for whoever scored the winner, and it happened to be Blake Wheeler in a shootout. I felt it only fair to give it a personal touch, with a hand-written letter of thanks.

My hostility towards Montréal is probably the sense of entitlement Habs fans had coming into the season. It seemed like they were ready to pick up the Cup in September, and members of the media were just about ready to hand it over.

2.)  Have any players actually sent thank you letters in return?

Unfortunately, no. I'm quite disappointed, but I'm still hopeful at least one player will get back to me. I'm also hopeful that I can present my framed letter for Daniel Alfredsson to him in person, but I'll have to wait until the Sens get back from their road trip for that.

3.)  What is your favorite moment so far that has happened in regards to this?

It's definitely my letter to Alfie, but there have been other moments. I enjoyed my letters to Jason Blake and Alexei Ponikarovsky, in which I sent them Canadian Tire money because they're dirty Leafs. One of the nicest things is having fans from so many teams (Buffalo, Boston, New Jersey, Toronto, and others, I'm sure) unite under the anti-Habs banner.

I can also safely say that my least favourite moment was writing a letter to Steve Downie, who is my sworn enemy after his dirty hit on Dean McAmmond.