Sabres Pick up Dominic Moore from the Maple Leafs

Share All sharing options for: Sabres Pick up Dominic Moore from the Maple Leafs 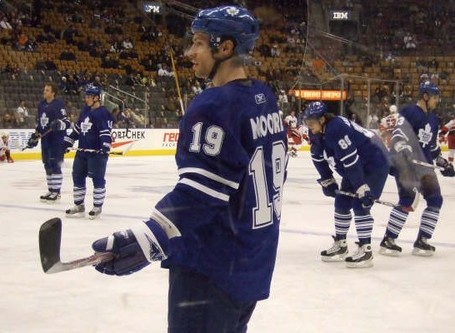 The Sabres make a shocking move in acquiring Dominic Moore from the Toronto Maple Leafs.  In return they sent a 2nd round pick that they received from the Carolina Hurricanes.  This pick was flipped as part of a four way trade with the Hurricanes/Kings/Oilers that sees Ales Kotalik go to the Oilers.

Moore is a rental center for the Sabres. He can play well but is going to want a nice payday come free agent season.  In terms of the trade itself, it makes sense for the Sabres to flip Kotalik for Moore, who has a lesser cap hit and can fulfill the same role.
Whether the Sabres have won in this trade is yet to be seen.