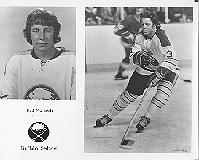 McIntosh moved on with his hockey career after retiring in 1979 and starting coaching the London Knights from the OHL.  McIntosh coached for three seasons from 1980-83 and then again briefly during the 1996 season.  He won CHL and OHl executive of the year in 1997.