Share All sharing options for: The Daily Roundup for 3/30 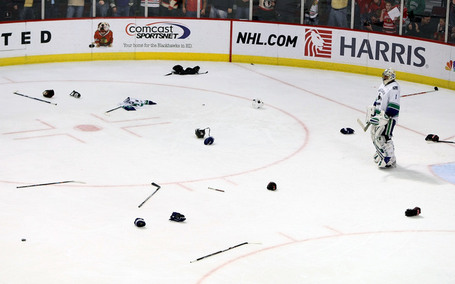 The Buffalo News takes a look at the homestretch of the season.

With Miller back, the Sabres goal is to catch the Canadiens.

The Boston Globe and Boston Herald have the Bruins recaps while the Philadelphia Inquirer has the Flyers recap.

Japers' Rink takes a look at powerplay opportunities in the playoffs.

Three articles on Sean Avery and the Rangers playing the Devils tonight from In Lou We Trust, Newark Star-Ledger, and Ranger Rants.

Mike Knuble is the Flyers' nomination for the Masterson trophy.

Erik Cole could be staying with the Hurricanes after this season.

Apparently the NHL referees are favored toward the Hurricanes.

The Penguins are hanging up the baby-blue Pens jersey for the rest of the season because they feel its bad luck.

Panthers goaltender Craig Anderson has earned himself another start in goal.