Share All sharing options for: The Daily Roundup for 3/28 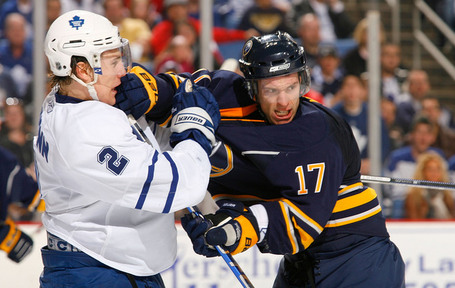 Game reviews from The Willful Caboose, Shots off the Crossbar, Sabre Kallisions, BfloBlog, Side of Pork, and The Buffalo News.

The Toronto Sun and Toronto Star have the Leafs postgame reviews.

The Bruins' Phil Kessel will miss the next two games for the Bruins due to an undisclosed injury.

Bleatings from a Caps Nut has the Capitals recap while Tampa Bay Online has the Lightning recap.

On Frozen Blog has a fond farewell to retiring referee Don Koharski.  Fond as in get the hell out.

Interchangeable Parts has a running diary for the game last night.

In Lou We Trust has the Devils recap while the Chicago Daily Herald has the Blackhawks recap.

The Flyers are starting to see glimmers of Peter Forsberg in Alexander Giroux.

Martin Biron has established himself as the Flyers number 1 goalie.

The Hurricanes are the most disciplined team in the NHL.

Jussi Jokinen is becoming a well-rounded hockey player for the Hurricanes.

Carolina on Ice has a look at the politics behind bobbleheads.

Beating the Flyers on Thursday has given the Panthers a jolt of confidence.