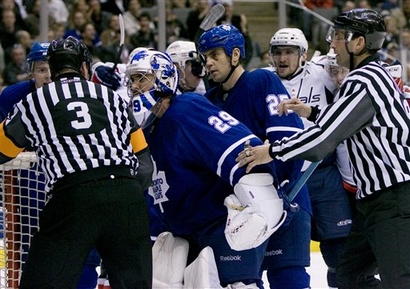 As the Sabres glimmer of hope continues to fade on this dying season, we welcome the Maple Leafs and all of their crazy fans to HSBC arena for one last game this season.

The Sabres played like a team that needed the two points they earned against the Panthers on Wednesday night.  They stormed back from a two-goal deficit to score three unanswered goals and eventually take the win 5-3.  Tellqvist played well enough in net for the Sabres and the offense was actually able to bail him out to win the game.

Tonight's big news is the return of Ryan Miller.  Miller will start tonight against the Leafs after missing a month due to a sprained ankle suffered against the Rangers.  This Buffalo team needs to basically win out to have any chance at making the playoffs and if Ryan is rusty at all it could very well submarine our chances.

Across the rink, the Maple Leafs are going to start veteran Curtis Joseph after Martin Gerber earned himself a three game suspension for making contact with the referee during Tuesday's Capitals game.  The Leafs have been on a roll themselves winning four of their last five games.

These two teams really do hate each other and always put on a good game.  As long as the playoff hopes are fading, I guess all we can ask for as fans is for an entertaining game.  Game time is 7:30 pm at the Bank.