Share All sharing options for: The Daily Roundup for 3/26 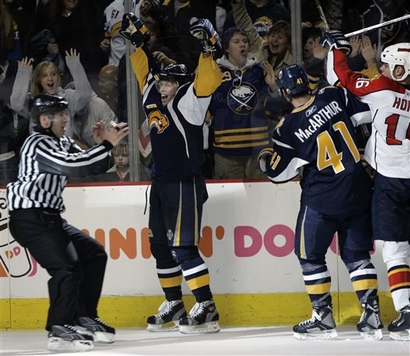 Game reviews from Shots off the Crossbar, Sabres Kallisions, The Buffalo News, Top Shelf, and The Goose's Roost.

The Bruins are starting to get ramped up for the playoffs.

Manny Fernandez is starting to become the good soldier for the Bruins.

With the Sabres beating the Panthers, the Devils clinched a playoff berth.  Glad we could help someone else with that.

The Devils take a mini vacation after hitting a figurative wall.

With the Sabres beating the Panthers, the Capitals clinched a playoff berth.  We are just spreading the wealth aren't we.

The Flyers are having Scott Hartnell hair night and for that the Philly Inquirer did a piece on him.

Canes Country has the Hurricanes recap while Silver Seven has the Senators recap from last night.

The Hurricanes have become a tighter defensive team.

Pensburgh has the Penguins recap while Inside the Flames has the Flames recap from last night.

The Dark Ranger has the Rangers recap while Hockey Wilderness has the Wild recap from last night.

The Daily News has a look at the hard road ahead for the Rangers.

Eric Engels from Hockeybuzz believes that the out fo the Canadiens win emerged some leaders.