Should He Stay or Should He Go: The Great Darcy Regier Debate

Share All sharing options for: Should He Stay or Should He Go: The Great Darcy Regier Debate 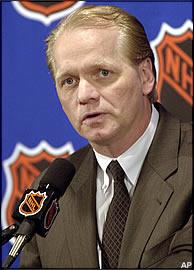 During the Sabres recent swoon and dive in the standings, many things have been said about management, coaching and the players. One of the suggestions is to fire the General Manager Darcy Regier. Many people have differing views on this including D.O. and Coolman. D.O. and Coolman debate the topic of Darcy Regier staying as GM as well as his legacy as the Sabres GM.

D.O. - It seems as though Darcy Regier and Larry Quinn have been made the scapegoats for the Sabres failures by the fans and media alike. In my opinion the criticism has been unfair to both guys but mostly to Darcy Regier. Regier has built a very talented team that has under-achieved for two seasons. The reasons the team has under-achieved are numerous and too long to spell out right now but one thing is certain...it is not the fault of Darcy Regier.
In his 10 or so years with the franchise he has made many more good/great moves than he has poor moves. Many of the decisions that are considered "bad moves" were forced because of financial reasons or because a player simply didn't want to be here. Regier has been criticized for allowing good players to leave town but not one of those players have played to level they are paid to play. If that is the case than why is Darcy Regier criticized so much for letting them go?

Coolman - I will agree with you that Regier is being unfairly criticized when it comes to the Briere and Drury cases. There were too many factors going on in the background for it all to hang on Regier's head and I think that in a broader sense he isn't taking all of the blame there. That being said, Regier is still a bad GM who has gotten lucky.

The Regier era can be broken down into four different sections, 1997-2001, 2001-04, 2005-07, and 2007-09. From 1997-2001, the Sabres can be characterized as an average team that was made great by elite goaltending. John Muckler handed Regier a team that was pretty much built and starting to climb with Hasek leading the way. When Hasek left the Sabres, the wheels fell off the bus because behind Hasek was an average team. The team struggled mightly until after the lockout when they were handed another gift by the league in the rule changes. As the rules are starting to get lax again, this team starts to falter.

Regier's run as a GM has not been so much as making the right move for the team as it was falling into a pile of crap and coming out smelling like a rose twice. While the moves that Regier made may work for the team, ultimately unless a dramatic shift happens in the league this team is not going to get better without a major shift in thinking. That major shift has to start with the GM.

D.O. - You make some valid points regarding Darcy being handed an average team with a spectacular goalie. I don't credit Darcy Regier with the Sabres making it to the Stanley Cup in 1999 because it was obviously Dominic Hasek that led the way.

Although I can agree with some points I think it is a stretch to say that Darcy Regier is a "Bad GM that got lucky". We are talking about the same guy that once traded Michal Grosek for Doug Gilmour and J.P. Dumont and traded Chris Gratton for Danny Briere. He has proven time and time again that he makes good calculated moves. If you want to criticize Regier for sometimes being too patient fine, but there is no way that he is a bad GM that got lucky a couple of times.

We often forget that around the same time that Dominic Hasek selfishly left the Sabres organization, the owners were being thrown in jail. The team was forced to declare bankruptcy and was owned by the NHL. It is impossible to blame Darcy for the debacle that took place early in this century.

As for the contention that he got lucky because the league changed their rules; you are partly correct. The Sabres did take a chance that the league was going to change the rules but I think it was common knowledge that the game needed to change. The Sabres were in a position where they had just come off of bankruptcy and needed to rebuild. They made an organizational decision, that Darcy was a part of, that they were going to build their team for after the lockout and not worry so much about the final year before the lockout.

I don't think the problem with this team is the GM. I think he has built a talented team with the resources he has had. The problem is that for whatever reason, whether it be the coaching philosophy or the NHL's failure to continue calling the game the way they did after the lockout, the players are not being utilized to their strength. It is probable that the Sabres are going to miss the playoffs again but firing the GM will be a mistake that will set this franchise back another couple of years.

Coolman - This team is just not talented enough. At its best this team is sixth place team in the conference. They are going to be nothing more than a marginal playoff team that never has a chance to move on unless they go through a complete attitude change. That change will never happy with Regier as a GM because he seems to be set in his ways with a team that is built on speed and skill. He doesn't want to adapt his team and add the pieces that are glaring needs.

Detroit Red Wings GM Ken Holland entered his position with the Red Wings during the same summer that Regier joined the Sabres. The Red Wings have made the playoffs in every season during Holland's reign and won three Stanley Cups. Holland has learned to adapt to the game and bring in the right players whether under a salary cap or not which is something that Regier has shown he doesn't have the ability to do. A good GM adapts his team to his situation to make them the best they can which Regier has shown that he can't do.

If the Sabres are going to be a perennial playoff team they need to shift their attitudes and be able recruit the correct players that will fit the play of the league during that season. The Sabres with Regier are just too stubborn to change.

Only time will tell who is right or wrong but now that you have heard our arguments, we want to hear yours. Comment away and make sure to vote in the poll.