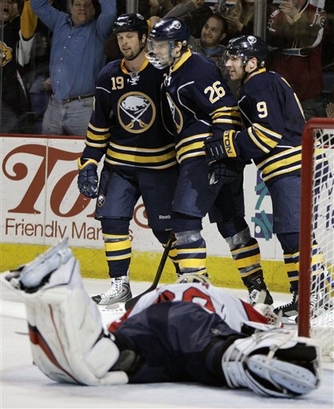 The last time these two teams met in Buffalo, that was the overall theme of the game.  The Sabres won 3-1 which has been their only win in their last seven games.  This would be the only showing that the Sabres have had and they need another good showing as their playoff hopes keep slipping.

The Sabres are seven points behind the eighth place Montreal Canadiens with 10 games left in the season.  They also have a game in hand on the Canadiens.  For the Sabres to take over the eighth spot they also have to overtake the ninth place team in tonight's opponent the Panthers.

The major key to this game and every game the Sabres have played in the last two weeks is to win.  A fairly simple concept that the Sabres can't seem to grasp as they try and fumble away another playoff chance.  In net for the Sabres is going to be Mikael Tellqvist and for the Panthers is probably going to be Tomas Vokoun.  The Panthers still play that suffocating trap style of play when they are in the lead so for the Sabres to get the game to open up they need to score early and often.  Vokoun has been pretty average against the Sabres this season going 0-1-1.

Game time is 7:00pm at the Bank with Ronan Tynan singing tonight.  That's a great sign because the Sabres just lay an egg when he is in the building.