Share All sharing options for: The Daily Roundup for 3/24 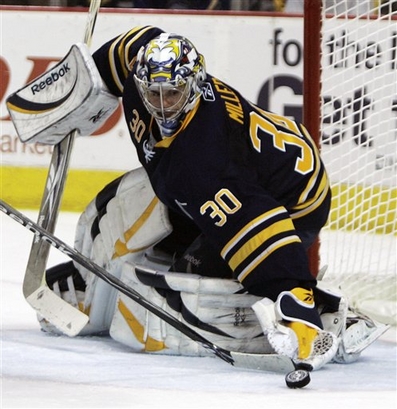 Bucky is reporting that although Miller practiced yesterday he won't be in the lineup for Wednesday's game against the Panthers.

Heather from Top Shelf feels like she has to explain why she keeps going to hockey games.

The Bruins are starting to heal and possibly play better hockey heading down the stretch.

In Lou We Trust has the Devils recap while Broad Street Hockey has the Flyers recap of the Devils/Flyers game.

The Star Ledger is looking at why the Devils are becoming roadkill, their words not mine.

Puckhead Thoughts is looking at whether the Capitals are ready for the playoffs.

The Flyers found their power play against the Devils.

The News And Observer has the Canes recap while the Miami Herald has the Panthers recap of the Hurricanes/Panthers game last night.

The Pittsburgh Post Gazette is looking at a Flyers/Penguins playoff series.

The Dark Ranger looks at how big of a loss the Senators game was.

Are Canadiens fans pushing the panic button yet?

Don't count on a second outdoor game in Montreal.

Nathan Horton returned to the Panthers lineup against Carolina.