Share All sharing options for: The Daily Roundup for 3/23 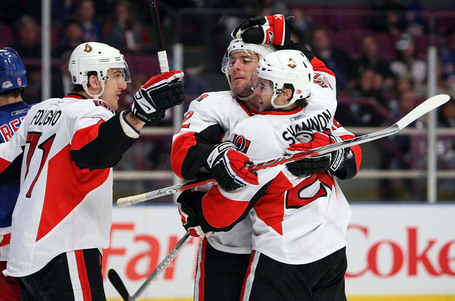 Kate from the Willful Caboose is going through a shift in perception.

Hockey Talk for the Intelligent Fan has a few thoughts on the weekend of doom.

Ryan over at the Goose's Roost compares us to Ottawa.  How dare he do such a thing.

The Bruins have clinched the Northeast Division.  Here is a recap from the Boston Globe and In Lou We Trust has the losing recap.

Are the Devils out for the race to first?

Japers' Rink takes a look at the Capitals Penalty Plus/Minus.

Pensburgh has Penguins view while the Phialdelphia Daily News has the Flyers view of the Penguins/Flyers game from yesterday.

Who exactly are the real Flyers?

The Hurricanes and Panthers fans are upset over the NHL ridiculous exclusivity agreement with Versus.  Could you imagine the uproar if this actually happened to a Buffalo game?

The Hurricanes are looking to get bigger and bigger.

Blueshirt Banter has the Rangers recap while Silver Seven Sens has the Senators recap from the Rangers/Senators game.

Litter Box Cats is feeling the same way we are about their playoff chances. And they are only one point behind.