Share All sharing options for: The Daily Roundup for 3/22 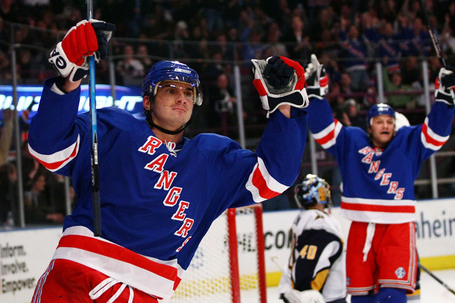 Just so we can all feel pretty depressed, here is the playoff profile from Sports Club Stats.

A Bruins look at the Bruins/Devils game this afternoon and here is the Devils preview.

A great look at the Bruins collapse down the stretch.

Brodeur hopes to get the shutout record this season but he isn't planning on it.

Canes Country has the winning recap while Japers' Rink has the losing recap of the Hurricanes/Capitals game.

Japers' Rink has an interview from Sport Express with Ovechkin.

Bleatings from a Caps Nut has a look at the Capitals playoff race.

The Philadelphia Inquirer believes that the Flyers need to make their power play much better heading into the playoffs.

The Inquirer and the Flyer Frequent has a preview of the Penguins/Flyers tilt on NBC today.

Evgeni Malkin will not be suspended for the hit he had during the Penguins/Kings game on Friday.  Video is included in the link.

The Confluence thinks that Dan Bylsma has erased the interim tag.

Eric Staal is fine after whacking his head off the post during Friday's Hurricanes/Islanders game.

Habs Eyes on the Prize has the losing recap while the Toronto Star has the winning recap of last night's Canadiens/Maple Leafs game.

Habs Eyes on the Prize has a look at how Bob Gainey's bench just isn't working for him.

The Miami Herald has the losing recap while the Neutral Zone Trap has the winning recap from last night's Blue Jackets/Panthers game.

AHL referees are what they are, minor league referees.  And in this case they upset Tuukka Rask after blowing two calls.  And Rask let them know it.