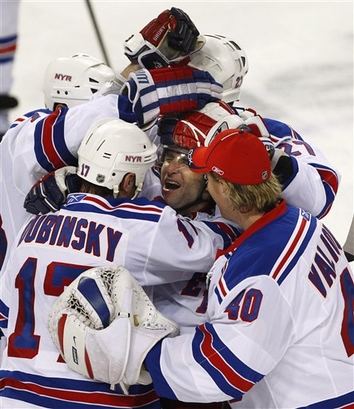 I know yesterday I said that a five point deficit was not hard to overcome and could be done with games in hand and matchups against the 8 and 9 seeds.  Now, the Sabres have lost another game and that five point deficit still lingers.  Also, the 8 seed has changed and the game in hand has disappeared.  Sports Club Stats gives the Sabres a 17.5% chance of making the playoffs.  What all of this means for a fan is that there are 11 games left in this season and we should now just watch for the sake of winning and not holding hope for something that most likely will not come.

In net tonight is probably going to be Henrik Lundqvist for the Rangers and maybe Mikael Tellqvist for the Sabres.  The Sabres are really desperate for something to go their way after losing three straight games.  The Rangers are just trying to gain some more points in their quest for staying in the playoff hunt.