Share All sharing options for: The Daily Roundup for 3/21 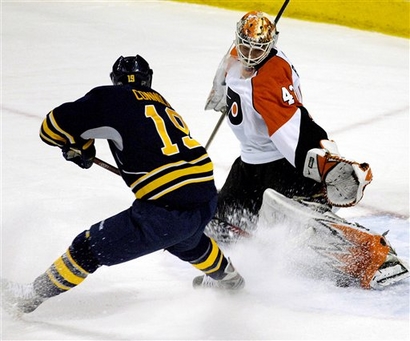 A few recaps from the game including Shots off the Crossbar, Top Shelf, The Willful Caboose, and The Buffalo News.

You know that firing Ruff debate that continues to rage on, Bucky has another look at it.

The Philadelphia Daily News has a look at Briere's resurgence last night.

The Bruins have been on a 3-5-1 skid and Julien is trying to change the mentality around the team.

The Star Ledger has the winning recap while Hockey Wilderness has the losing recap of the Devils/Wild game last night.

The Confluence has the winning recap while the LA Times has the losing recap of last night's Penguins/Kings game.

Elliott Freedman thinks that Sidney Crosby is changing for the better.

Canes Country has the winning recap while Lighthouse Hockey has the losing recap of the Hurricanes/Islanders game.

Blueshirt Banter has a look at why Sean Avery just didn't work in Dallas.

Gomez doesn't expect any retaliation for his hit on Miller tonight at MSG.

Habs Eyes on the Prize believes that there is still more to build off of from the loss to the Senators.

The Panthers are still adjusting with Nathan Horton out.