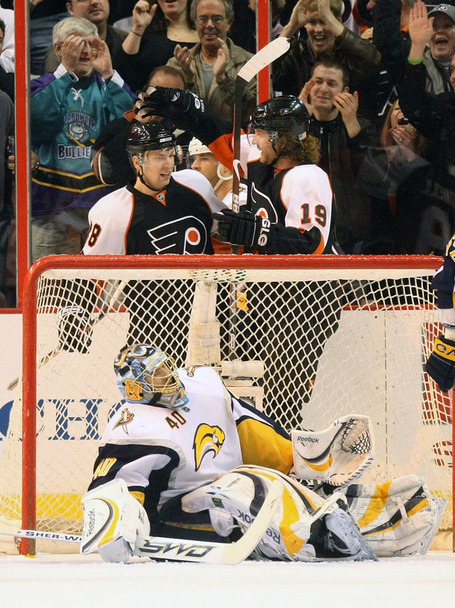 After giving up two consecutive two-goal leads against teams that were ranked below them, the Sabres did what they thought best.  They relaxed and scrimmaged during practice yesterday.  Honestly, for a team that has been frustrated and playing scared they need to find something that will take their minds off the past and look toward the future.

Right now the future doesn't look all that great.  The Sabres have 12 games left in the season.  They are sitting in the 10th spot in the Eastern Conference, four points behind the Panthers in 9th place and five points behind 8th place Carolina.  The good news is we have a game in hand on the Panthers and two games in hand on the Hurricanes.  We also have to play them both one more time during the season.  A five point deficit can be overcome.

Martin Biron will be in net tonight and opposing him will be Patrick Lalime.  The question is, can this Buffalo offense play with some swagger and be more physical with the Flyers.  This Sabres team does not like to get hit and the best way to not get hit is to hit them first.