Share All sharing options for: The Daily Roundup for 3/20 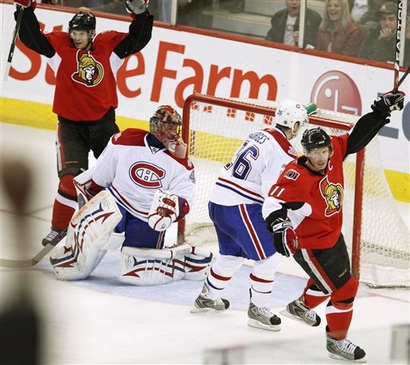 The Sabres have a fun day to ease the frustration with a scrimmage.

With the addition of Tortorella behind the bench, player's roles in the system will be heavily evaluated.

The Ranger Pundit takes a look at why Renney should have been fired.

Goal Line Report has a few notes on the Rangers heading into their four point weekend.

Silver Seven Sens has the winning recap while Four Habs Fans has the losing recap of last night's Senators/Canadiens game.

Habs Eyes on the Prize has a look at the major flaws in the Canadiens team that are starting to rear their ugly head.

Litter Box Cats has the winning recap while Pension Plan Puppets has the losing recap of last night's Panthers/Leafs game.

Nick Boynton has no hard feelings about being a healthy scratch after his team suspension.

There is starting to be an uproar over Ovechkin's celebration of his 50th goal last night.  Honestly people, get a life.  Video will be below.

Panthers winning and Canadiens losing shake the standings a little.  Not much help for the Sabres though.