The Curious Case of Maxim Afinogenov

Share All sharing options for: The Curious Case of Maxim Afinogenov 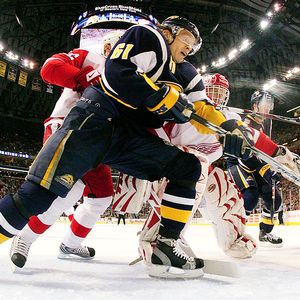 Maxim Afinogenov has been a dynamic player in his career in Buffalo.  He always has had a me-first mentality which has worked for his game because of the fact that he usually could outskate the typical defenseman and put the puck in the back of the net.  This mentality has also found him trouble throughout his career as he is known to give the puck away a fair amount as well.

The Sabres have moved on with Max.  He has fallen out of favor with coach Lindy Ruff since the 2007 playoffs and with his current groin injury has found a permanent spot on the bench.  Afinogenov told the Buffalo News on Sunday that he has been cleared to play since mid February and that if the Sabres were not going to play him then they should try to move him.

The Sabres have tried shopping Afinogenov, in the past offseason and again when the season started.  There hasn't been much of a market due to Afinogenov's play in the last few years and the likelihood that after his current contract runs out he will play the rest of his career in the KHL.

There have been rumors that there are a handful of teams that could use his services, including the Colorado Avalanche but that was at the beginning of the season.  Many teams really can't afford a rental player that has his nose for the turnover.  He may fit well with the Canadiens or maybe the Panthers but thats a long stretch.  There aren't many teams that could use a me first type of player heading into the playoffs.

Afinogenov needs a change of scenary when it comes to his game though.  The two most productive seasons he had were the 2005-06 and 2006-07 seasons when the game opened up more and he was allowed to make the moves that he is known for.  When the game tightens up, defensemen key in on him and smother which leads to more turnovers.