Share All sharing options for: The Daily Roundup for 3/19 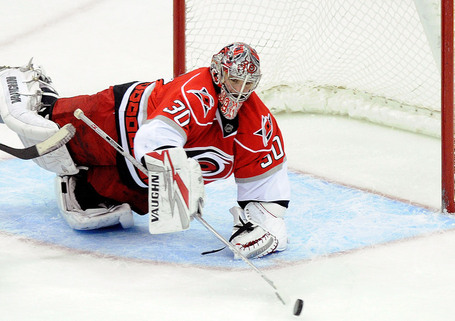 Both Heather B from Top Shelf and Kate from Willful Caboose are putting their final touches on the Lindy debate.

Larry Brooks from the NY Post believes that the Rangers are playing their best hockey of the season.

The Ranger Pundit has some thoughts Callahan.

Guy Carbonneau was shocked that he was fired as Canadiens head coach.  Really?

The News and Observer has the winning recap while In Lou We Trust has the losing recap from last night's Hurricanes/Devils game.

Wes Goldstein from CBS Sports feels that the Panthers gamble of keeping Bouwmeester is going to blow up in their face.

The Panthers aren't quite panicking yet.

Puck Daddy has a look at whether last place teams should tank or not.

Craig Custance from the Sporting News has a look at the issues with the Devils game being shown on NHL Network Tuesday night.

Mike Chen has a look at the lack of officiating as the season winds down.

Sports Illustrated has a look at the effect of the butterfly technique on goaltenders.