Share All sharing options for: The Daily Roundup for 3/18 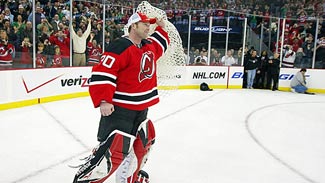 You think Sabres fans are annoyed at this point.  Here is the clue to the answer.

The Roost has a good breakdown of what exactly is happening to this team.

Newsday has the winning recap while the Canadiens website has the losing recap of the Rangers/Canadiens game.

Canes Country has a look at the Hurricanes defense coming into next season.

Brind'amour plans on staying for next season.

Litter Box Cats has the losing recap while Japers' Rink has the winning recap of the Panthers/Capitals game.

The Panthers are having the same sort of struggles the Sabres are having.  Just on a smaller scale.

Brodeur passed Patrick Roy last night to be the all time wins leader.

The Capitals are starting to sell cowbells at home games now.  Because 18,000 clanging cowbells seems like a good idea.

There is a ongoing feud about who actually helped build the Spectrum.

Jes Golbez has a look at the NHL's worst defensive forward.

The Maple Leaf front office is taking it hard to Justin Pogge.

The Toronto Sun did a poll that says that most Canadians want to ban fighting in the NHL.  Granted most of those polled weren't hockey fans.

I've taken the Penguins out of the mix by being 8 points up with 12 games to go.  We just won't catch them.